We have suddenly moved into the season of Advent! If you read the Springfield newsletter that came out this week, you know that there are a lot of words that are connected to Advent.

There are lots of different ways we can see the next 3 ½ weeks. A lot of it involves wrapping presents, sending cards, putting up decorations, holding parties, enjoying music, last-minute shopping, cooking, and all that other stuff.

But there’s a reason for everything we do this month. Advent is the season of anticipation, of expectation, of preparation, for the coming of Christ into the world.

There are a lot of Scripture readings for the month of Advent. This morning, I want to turn the dial on the wayback machine, and listen to what people were hearing, for hundreds of years before Jesus was born.

This is what Isaiah son of Amoz saw concerning Judah and Jerusalem:
In the last days the mountain of the Lord’s temple will be established as the highest of the mountains; it will be exalted above the hills, and all nations will stream to it. Many peoples will come and say,
Come, let us go up to the mountain of the Lord,
to the temple of the God of Jacob.
He will teach us his ways,
so that we may walk in his paths.”
The law will go out from Zion,
the word of the Lord from Jerusalem.
He will judge between the nations
and will settle disputes for many peoples.
They will beat their swords into plowshares
and their spears into pruning hooks.
Nation will not take up sword against nation,
nor will they train for war anymore.

We feel pretty superior when we see the stores put their Christmas stuff out the week after Hallowe’en. But that’s nothing compared to the years of expectation people went through, waiting for the Messiah.

The words we just listened to this morning were written by the prophet Isaiah. Does anybody remember when he wrote them?

750 years before the birth of Jesus. That’s how long!

During that 750-year waiting period, Israel had been destroyed. Not once. Not twice. But several times. All the country’s leaders and rich people had been arrested, put in chains, and marched off 600 miles to Babylon, in Iraq. The ones who stayed home lost everything they had. These were not good times for Israel!

So, they tried to figure out why their country was in so much trouble. They focused on survival. They tried to put the pieces of their faith back together. And today’s reading was one of their first efforts.

Isaiah said that some day, the mountain where the Lord’s house once stood – the Temple, Mount Zion in Jerusalem – would be restored. It had been demolished and polluted. But one day, Isaiah said, it would be cleaned up and restored again.

And people from everywhere in the world would come to see it. People in every country would say to each other, “Let’s go there! Let’s go see the Temple of the Lord!”

For people who’d just been led away into slavery, this was some hope!

Isaiah said that learning and wisdom would flow out of Jerusalem again. People from all over the world would say, “Lord, teach us your ways! We want to walk in your paths!”

The word of the Lord would fill the city. God would settle all the disputes. And instead of wars, like the one that just destroyed them, there would be peace. People would be so confident of this, they would take their swords to the blacksmith shop, and hammer them out, and make plows to farm the land with. They would take their spears, and hammer them into pruning hooks for their fruit trees. Nations would never fight again, and people wouldn’t even remember what war was any more.

When I read that, it made me remember something next door in the Museum. I want to show you something special.

One of our Quaker ancestors, who survived the Civil War, did exactly what the prophet Isaiah said. We don’t know who it was, but it’s a part of the museum collection. 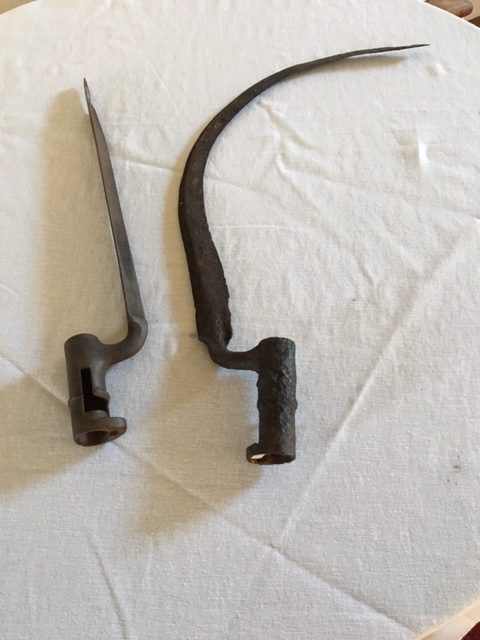 The one on the left is a bayonet. I don’t know if it was ever used to kill someone. I hope not. It may have been one of the thousands of weapons that were turned in here at Bush Hill. You may not know that the last major unit of the Confederate army — 32,000 men — stacked their arms about a half a mile from here, were given their meager pay, and went home.

The one on the right is a different bayonet. I’m going to pass it around, so you can see it better. They’re both from the Museum. But this one was turned into something different. Somebody took it to a blacksmith shop, and hammered it into a sickle to harvest crops with.

Isaiah had a lot of other things to say about the Messiah, too. He said:

The people who walked in darkness have seen a great light;
Those who lived in a land of deep darkness, on them has the light shined
The nation has multiplied; the Lord has increased its joy;
The Lord has broken the yoke around their necks and the bar on their shoulders.
For unto us a child is born, unto us a Son is given;
And the government shall be upon his shoulder,
And his name shall be called Wonderful, Counselor, the Mighty God,
The Everlasting Father, the Prince of Peace.

That is a tall order. Those are big shoes to fill. Fortunately for us – fortunately for the whole world – Jesus came to fill those shoes.

When we talk about Jesus, at this time of the year, most people think about a cute little baby, born in a stable, with angels and shepherds and wise men and all. We think Silent Night and What Child is This?

They were hoping and praying, and passing the hope on to their children, that one day, the Lord would send his own son to rule them and to bring an end to war and slavery and injustice. The promised king would be different from the kings they all knew. He would bring justice, and freedom, and peace.

In that same collection of writing, the prophet Isaiah said,

In the wilderness, prepare the way of the Lord!
Make straight in the desert a highway for our God!
Every valley shall be lifted up, and every mountain and hill made low,
The uneven ground shall be made level, and the rough places plain.
And the glory of the Lord shall be revealed, and all people shall see it together,
For the mouth of the Lord has spoken it.

We think about Jesus as the little baby born in a stable. But Isaiah saw – he knew! – that the Savior would come directly from God. Isaiah also knew that the Savior came from long before the actual birth of Jesus. Isaiah said it this way:
The Lord called me before I was born;
While I was in my mother’s womb he named me.
He made my mouth like a sharp sword,
in the shadow of his hand the Lord hid me;
He said, “You are my servant, in whom I shall be glorified. . .” (Isaiah 49:1-3)

God’s plan started long before any of us were born or even thought of. God has plans already in motion to set people free, even before they become slaves. God has a Savior prepared, even before people realize they’re fallen and broken.

More than seven hundred years before Jesus was born, Isaiah knew what Jesus would be doing. Isaiah said,

He was despised and rejected, a man of suffering and acquainted with weakness,
we held him of no account;
He was pierced for our wrongdoing, he was crushed for our sins,
the punishment that brought us peace fell upon him,
and by his wounds we are healed. . .

We shouldn’t be asking for less at Christmas. We need to be praying for more.

We’ve been waiting for a long time. Let’s welcome the Savior. Let’s get excited about Advent, the adventure. Come, Lord Jesus!