For the last two months, we’ve been talking about prayer. There’s a reason for that. Prayer is the foundation of the Christian life. Christians are supposed to pray a lot – in fact, we’re supposed to be praying every day.

There’s all kinds of prayers – the ones we say at meal times, prayers of blessing and prayers of giving thanks. Some people pray when they get up in the morning. Other people have their best prayer time when they go to bed, or in the middle of the night. I’ve talked to some of you, and we’ve got a lot of middle-of-the-night prayer people here at Springfield.

During the last two months, we talked about prayer that moves mountains. We talked about holy ground experiences. We looked at the Lord’s Prayer as a pattern that Jesus gave us.

We could probably spend a whole year together, just talking about prayer. It’s such a rich subject, and we’ve hardly scratched the surface of it.

This morning, we’re going to be looking at another of the great Gospel stories about prayer.

Jesus got into the boat and his disciples followed him. Suddenly a furious storm came up on the lake, so that the waves swept over the boat. But Jesus was sleeping. The disciples went and woke him, saying, “Lord, save us! We’re going to drown!”

Jesus replied, “You of little faith, why are you so afraid?” Then he got up and rebuked the winds and the waves, and it was completely calm.

They were amazed and asked, “What kind of man is this? Even the winds and the waves obey him!”

Years ago, my wife was teaching a group of 4th graders. She read them this story, and one of the boys said, “He did WHAT? That’s impossible!

That’s the fun part about working with kids. They’re more honest than grown-ups. You tell a group of 4th graders it’s the Holy Bible and they say, “I don’t see any holes!” You tell them a story like the one we heard today and instead of saying, “Oh, holy, holy!” they say, “That’s impossible!”

I wish we could all be open to seeing signs and wonders in our lives. A lot of the time, miracles are going on all around us. But I also wish sometimes that we could treat the Bible with a little bit less reverence. Because I think we miss how impossible some of these things are that we read about in the gospel.

This morning’s story was used by the early church as one its main symbols for itself. They saw the church as caught in a storm, with everybody in danger of drowning. The boat was about to be lost. They felt that being a Christian was like being in a boat in a storm at sea.

There’s an old prayer from a fishing village on the coast of France. The prayer says, “Oh God, your sea is so great and my boat is so small!” That’s how the early Christians felt a lot of the time.

Many of Jesus’ earliest followers were fishermen. They made their living out on the open water. They knew how dangerous it was – how storms could blow up without warning. They all had friends and family members who’d been lost in storms.

This story is powerful, because it related to their experience. They’d all been in danger many times. They knew what it was like. And they recognized that this morning’s story was a miracle.

The winds are strong, the waves are high. The boat’s in danger of sinking. But then Christ awakens, and calms the storm with a single word.

Over and over, the Bible challenges us: where is your faith? Where is your trust? Where is your memory of all the times the Lord has helped you? And not just you, but all the people who came before you, who trusted God and who were rescued and saved?

A storm can be anything. It can be literal or metaphorical. It can be physical danger. It can be stormy relationships. It can be financial trouble. It can be fighting an addiction. It can be illness of any kind. You fill in the blanks for yourself. We’re all in this story, at different times and different places.

Today’s story is so important that it’s found in seven different places in the gospel. They told the story seven times.

In one version, Jesus comes walking on water on his way out to the boat. Peter sees Jesus, and because Peter is one of Jesus’ closest friends, Peter asks if he can walk on water, too.

In the gospels, Peter is meant to be every Christian. Peter is you and me, not just a historical character. We’re supposed to identify with Peter. Jesus shows us what God is like; Peter shows us what ordinary people of faith are like.

Peter was just a fisherman. He wasn’t a holy person. He wasn’t a teacher. Fishermen were despised; they were on the same level as shepherds and other low-class people in society. The work was hard, smelly, dangerous and poorly paid.

Peter wasn’t stupid – he knew that people don’t walk on water. He knew he was risking his life. But his love for Jesus, his trust in Jesus, made him set his fear and his experience to one side. “At your word, Lord, I’ll get out of the boat!”

The moment Peter stopped trusting, he was in trouble. When Peter’s faith gave out, his faith was overcome by his fear. He looked at the storm instead of looking at Christ, all of a sudden he was drowning.

If you’ve ever seen that movie, The Perfect Storm, you’ve got an idea of what it’s like – waves like mountains, wind like insane spirits tearing you to pieces, a battle that never seems to end, no time to rest, every moment fighting for your life, the boat breaking up, the endless depths of the ocean beneath you, no light, no help, no way out.
That’s the way life feels sometimes. That’s the way life is.

This story in today’s gospel isn’t a fantasy. It’s about reality. It’s about life the way we really experience it. At the mercy of the storm, overcome by the waves, no help in sight.

And then, we see Jesus, walking towards us through the midst of the storm. We hear Jesus’ voice. We see Jesus’ reaching out his hand to us.

We’re in danger. We’re drowning. We’re dying. We are not coping very well! Our safety nets and our personal flotation devices aren’t performing the way they’re supposed to.

Sometimes Jesus is in the boat with us, but he’s asleep. Sometimes we’re alone in the boat by ourselves, and Jesus comes walking out to meet us, right through the storm.

And we fail again. We try to walk on water. We try to get out of the boat. We try to be just like Jesus, and we fail. We’re drowning!

When Peter cries out, “Lord, save me!” it’s more than just one foolish fisherman in trouble. Peter is everyone. Peter is us. We are Peter.

See, if you ask for help, you’re just like one of the greatest Christians in the Bible. Join the club!

And then, with just a word, Jesus calms the storm. Jesus says, “Peace! Be still!” and there’s a great calm. Instead of being surrounded by the storm, we’re surrounded by peace and stillness and safety. And the only thing you can do, is be amazed. 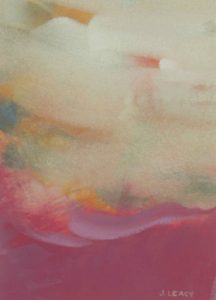 I put something special in each of your bulletins this morning. It’s a copy of a painting I’ve got in my office. It was painted by Joyce’s mother, who was a great artist.

Even though it’s just a small reproduction, you can see the storm clouds. You can feel the power of the waves. But if you look, carefully, very faintly, you can see someone on one of the waves. It’s a tiny figure, with one hand raised.

It’s Christ in the midst of the storm. The wind’s dying down. In the distance, the sun’s come out. One of the waves is turning golden. Just look at that picture for a minute. Take it home with you, and put it somewhere, to remind you of what Christ can do.

Let’s head into our time of open worship now. I hope you’ll think about this story. Think about your own times of fear and faith. Remember all the times God has blessed you, and helped you. Take this story into your heart.

If you’re afraid, let Jesus help you. If you feel like you’re drowning, reach out your hand. That’s what prayer is like. Remember that Jesus is the calm in the storm.