Quakers and the Underground Railroad (March 2018)

Slavery was a part of life in the American colonies – not just here in the South, but also in New Jersey, Rhode Island and New York in the early days.

Slavery was associated with crops which required lots of hand labor – sugar cane, rice, indigo and especially later with cotton. Some skilled slaves were “rented out” by their owners.

One of the earliest Quaker protests against slavery was the Germantown Declaration of 1688. During the 1700’s Quakers like John Woolman, Benjamin Lay and Anthony Benezet worked to convince their fellow Quakers of the evil of slavery. By the time of the American Revolution in 1776, you could not belong to the Society of Friends and own slaves.

Before the Civil War, almost half of the Quakers of North Carolina left in the early 1800’s to find new homes in the new free states of Ohio and Indiana. They stayed in touch with their relatives back here, and family ties had much to do with the Underground Railroad. 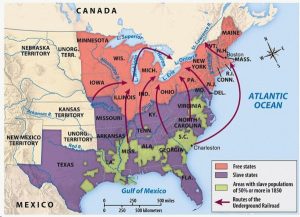 In the 1800’s, virtually all Quakers were opposed to slavery. Some were abolitionists, who felt that slaves should be freed immediately whatever the cost, while others were gradualists, who felt that emancipation needed to take place over time.

Some Quakers were involved with efforts to send freed slaves back to Africa and help them re-settle there. Other Quakers worked to teach slaves to read and learn skills and trades.

Helping slaves to escape was illegal, with fines of $1,000 (since the average daily wage was $1, the fine was equivalent to three years of a typical family’s income).

Quakers were deeply divided over whether it was right to obey the law, or to obey what they felt was God’s “higher law” and help them.

Slaves who managed to escape were assisted by the Underground Railroad, which was a loose and highly secret network which passed the escaping slaves from one “station” to another, often at night.

Allen Jay and his family worked on the Underground Railroad when he was a boy. His Autobiography contains one of the few written accounts of what it was like. Levi Coffin’s family was also extremely active on the Underground Railroad. The Mendenhall Plantation in Jamestown was a station, and many of you have seen the wagon with the secret compartment which was filled with escaping slaves.